THE WEDDING: Stania is Stiborova from now on :) Once upon a time in a remote kingdom ruled a Queen with a magic power to change lives of others, supported by a wise king beside her.

Tens of thousands of happy people lived in their kingdom, and the king and the queen had looked after them with love for several years. There was also space for dreams and wishes of the queen and king; space for love and fulfillment. Life, family, passion, love, and business – all these values connected together in their kingdom.

They had traveled to all parts of the World and brought their people inspiration, hope, and wisdom. They were magnifying their castle and enjoying moments with their family and children.

Everything looked so idyllic on the outside… 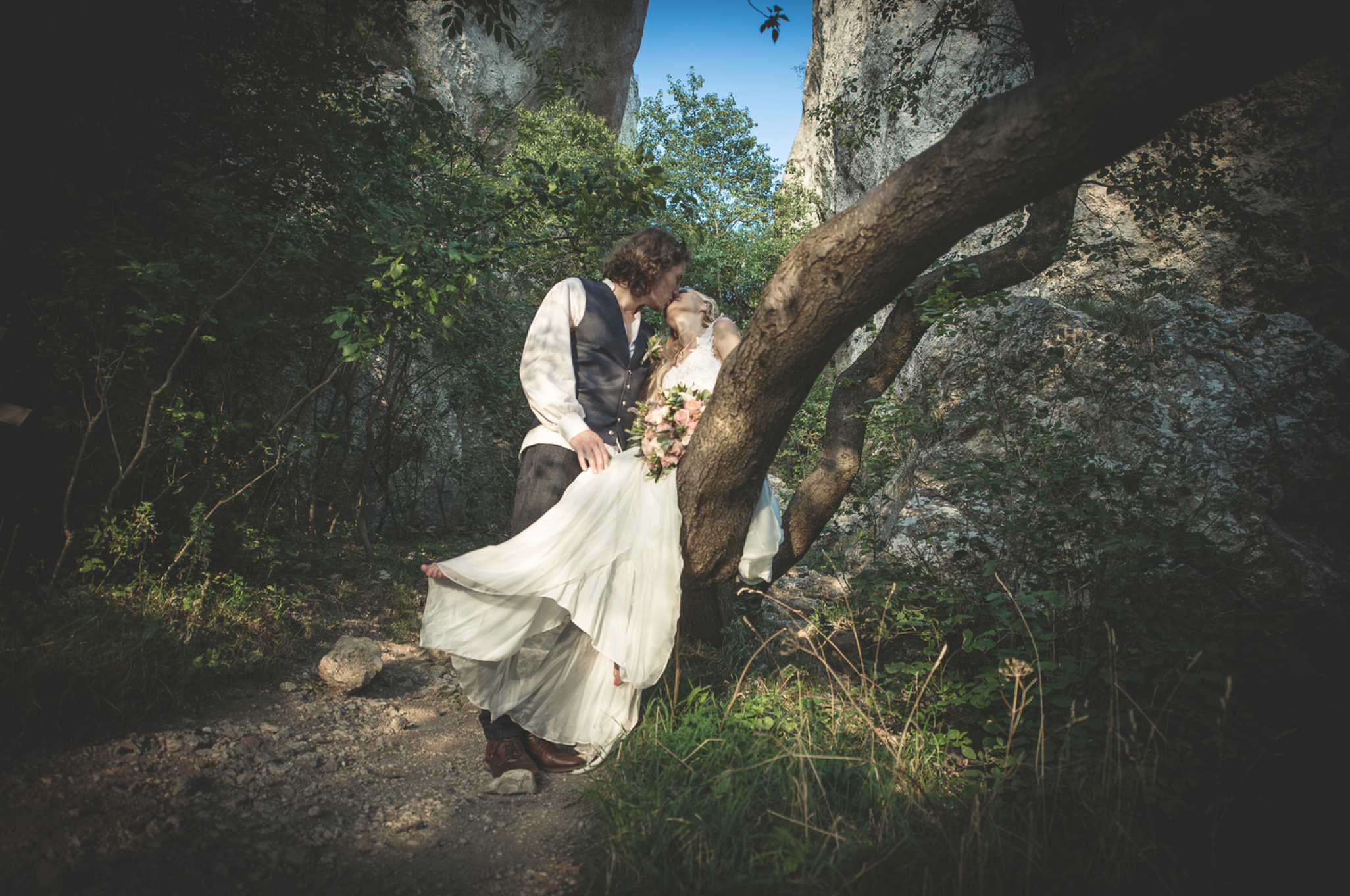 But one day a snowstorm came

It wasn’t the first time, but this time the storm was devastating. The whirlwind was breaking trees, and the snow covered the royal palace. Everything that wasn’t true disappeared under the avalanches. At some moments, it looked like nothing would stay the same anymore.

The queen and the king had to set off to the deepest places of their kingdom to rescue their empire, to face their biggest demons and pull out their glowing hearts from those dark caves. 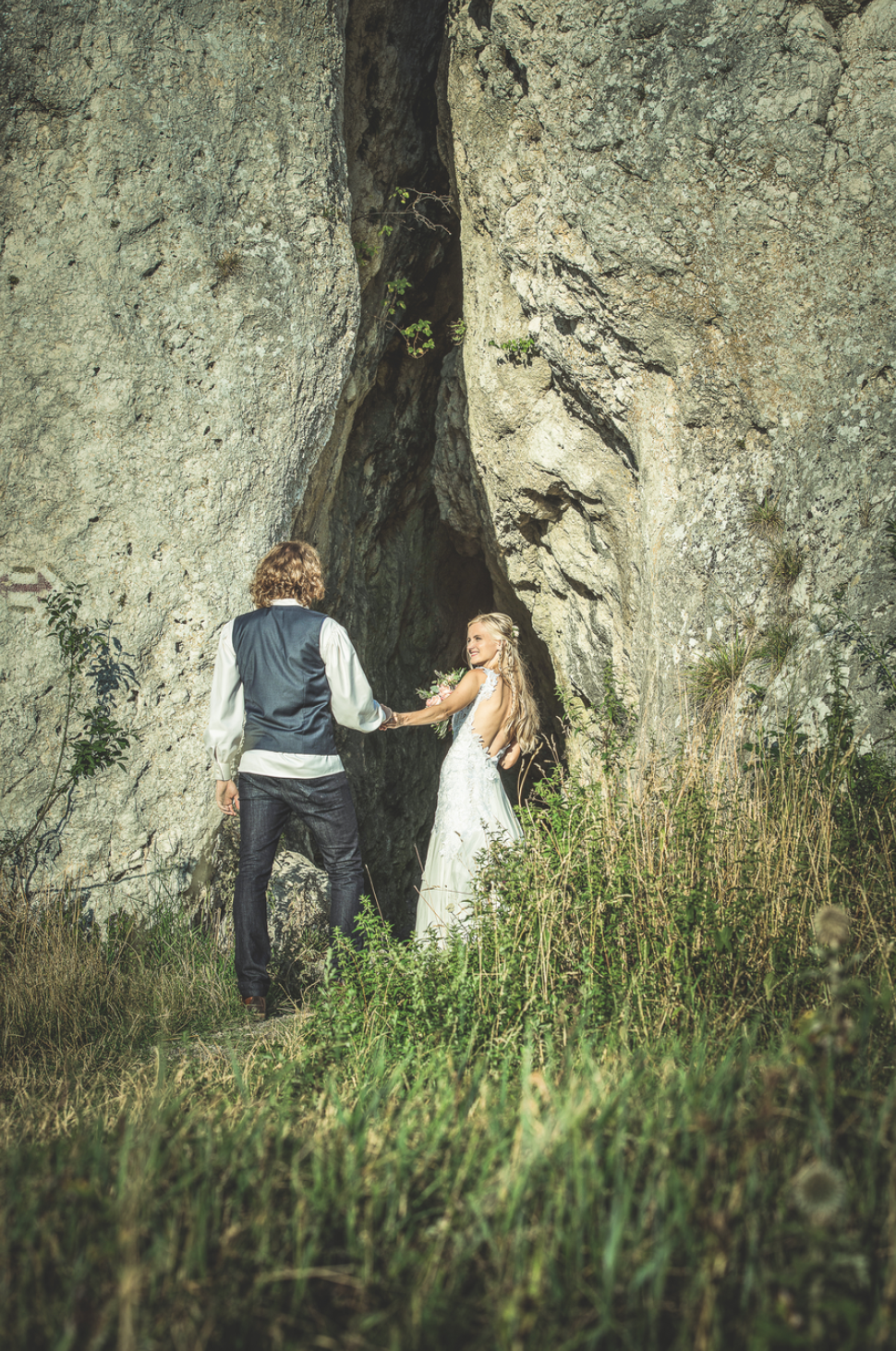 But every time they were standing right in front of this step – each time they couldn’t carry on for any longer, the fairy called Unconditional Love appeared to help them – again and again. She came to help them to fight the biggest demons, overcome their biggest shadows and darkest swamps. 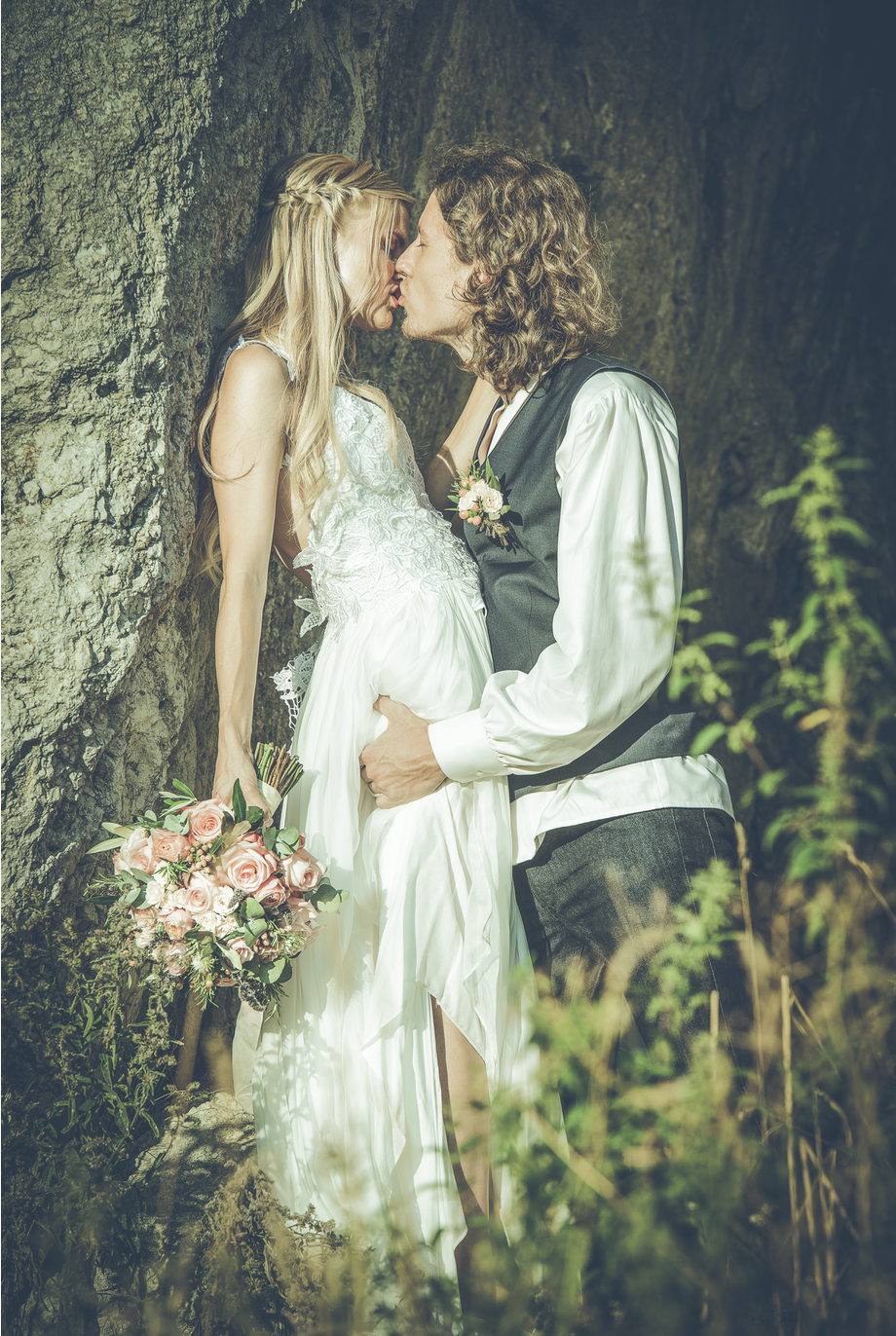 And then the king made a decision

One day, the king decided he will love his queen forever and despite the whirlwinds and storms that come, she is the woman of his life. He proposed to her. And the queen knew that whatever may happen, she loves the king the way he is and so she said YES… Nothing stayed the same as before

Strengthened by overcoming the storm and by meeting their demons, they discovered WHO they really are. The whirlwind carried away all masks and they saw each other with new eyes. They knew that a part of their kingdom was gone forever, but instead, a new space appeared, where they could build new and much more magnificent things.

They were standing on the edge of the abyss and the king became an eagle. The magic queen sat on his back and together they flew to the highest peaks and deepest swamps – to all the parts of the World. The eagle carried her and she was doing her magic. And together they were changing the World. And they lived happily ever after?

One never knows what tests life will bring. How their story ends is in the stars. In their hands, there is the DECISION TO LOVE. Either when the sea is calm or the storms bring large swells, they both know that it’s only up to them if they over and over again decide to love each other. 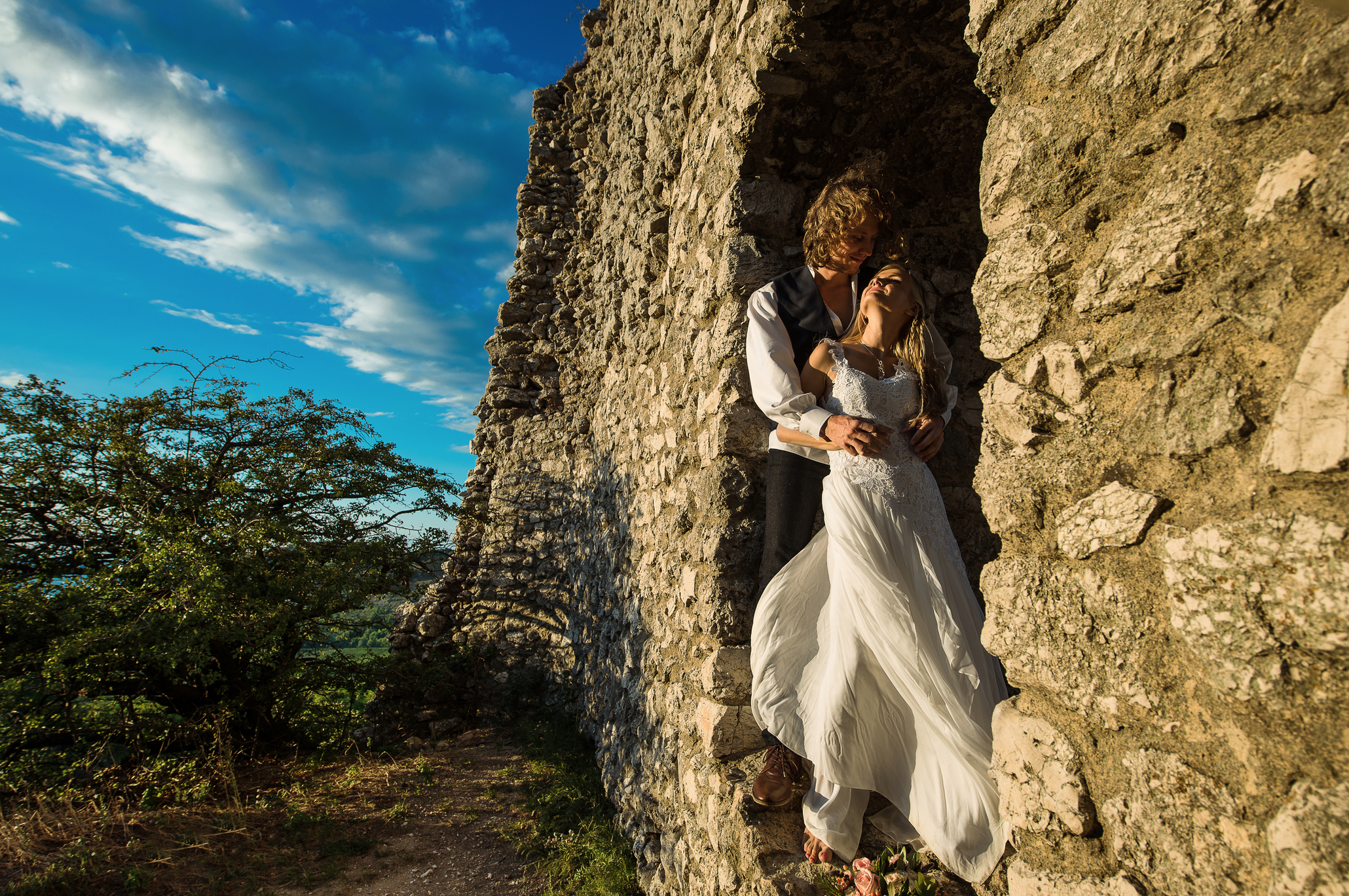 Hey newlyweds, it was the most beautiful wedding I have ever been to ❤️. Thank you once again for letting us be a part of it, and we wish you a fairytale marriage ❤️❤️❤️ PS: the dress was stunning
- Jára

Hi, I would like to thank you once again for the invitation and for the fabulous wedding. Strong event, good company, flawless organizing. It was beautiful. Thank you and all the best!!!
- Václav

It was a fantastic wedding. Perfectly organized, imaginative, flowing, kind and passionate. Definitely, the most beautiful one we have ever been to.
- Tereza

It is said that how you do anything is how you do everything. :) To make from every single event an experience that one remembers for the rest of their life, that’s our passion, and so we had imprinted it also into this day.

We dived in to the wedding in the same style we like. We were really thinking about every organized thing (and there were MANY): „Is this really us?“ and „Is this the energy that says who we are and supports us?“

Being truthful to ourselves played the key role

Authenticity in every millimeter was the basic priority during our preparations, for which we only had less than two months. One month before we still didn’t have a clue where our wedding was going to happen.

We weren’t able to discover “the right place” Then one day it suddenly appeared, and it was so clear – as if we had always known it. 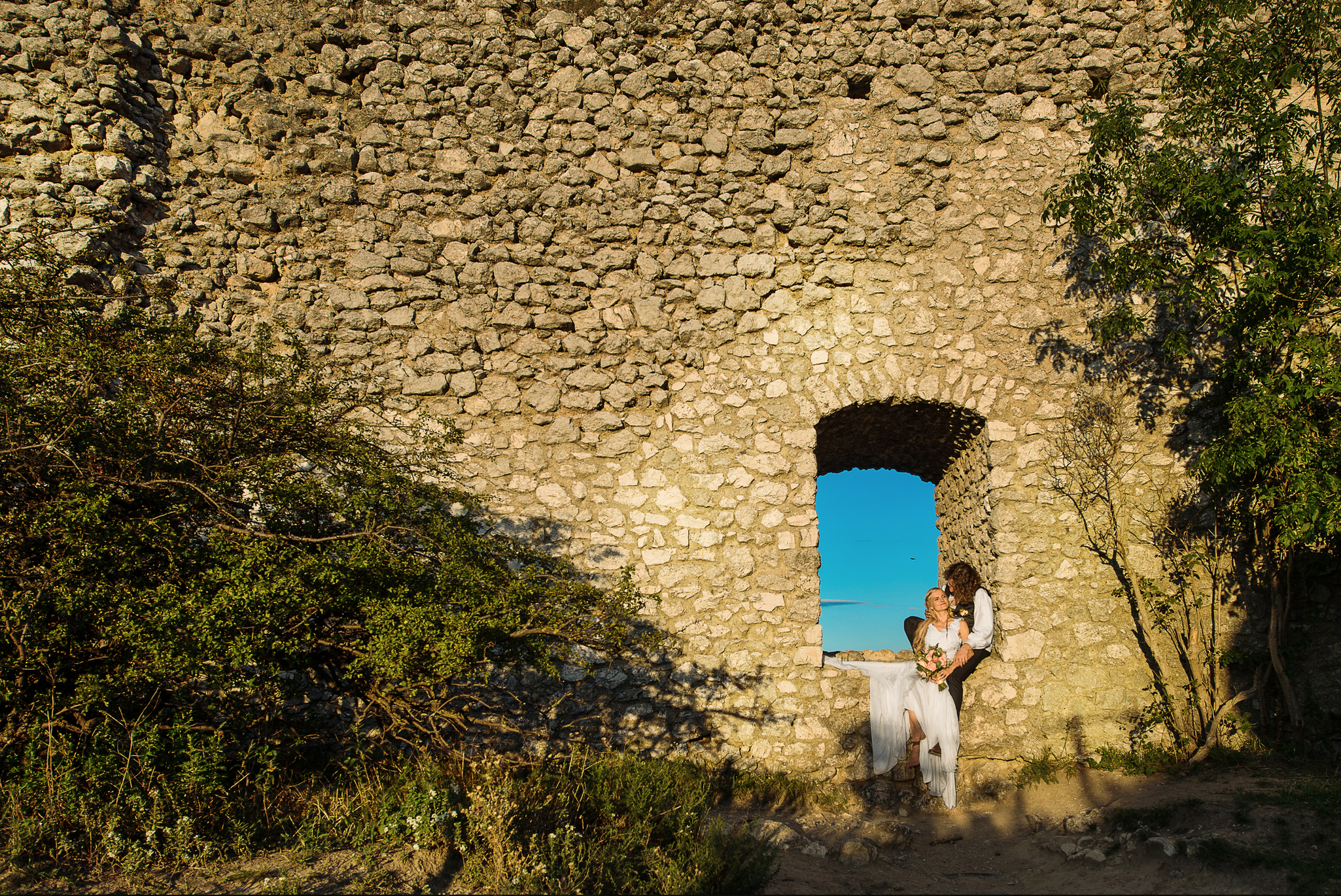 We had repeatedly come across “the traditions” or what other people say, and despite all this, we had stood up for what we wanted, even if it didn’t make any sense to others on the first sight.

Why for example do we have to have a wedding on Monday and two hours away from where we live…? Wedding portraits day before the wedding? Really…!? It made sense to us and it was what mattered.

We let the things come, we were saying YES to ideas that seemed too complicated, crazy or simply weird at the first sight.

When the fashion designer Táňa Havlíčková advised that Jirka (my husband) should wear a “Jack Sparrow type of shirt” to match my hand-made silk wedding dress, and we passed this picture to the tailor Abi Torte – we were a bit worried about the outcome :D. There was no other choice but to trust the process. 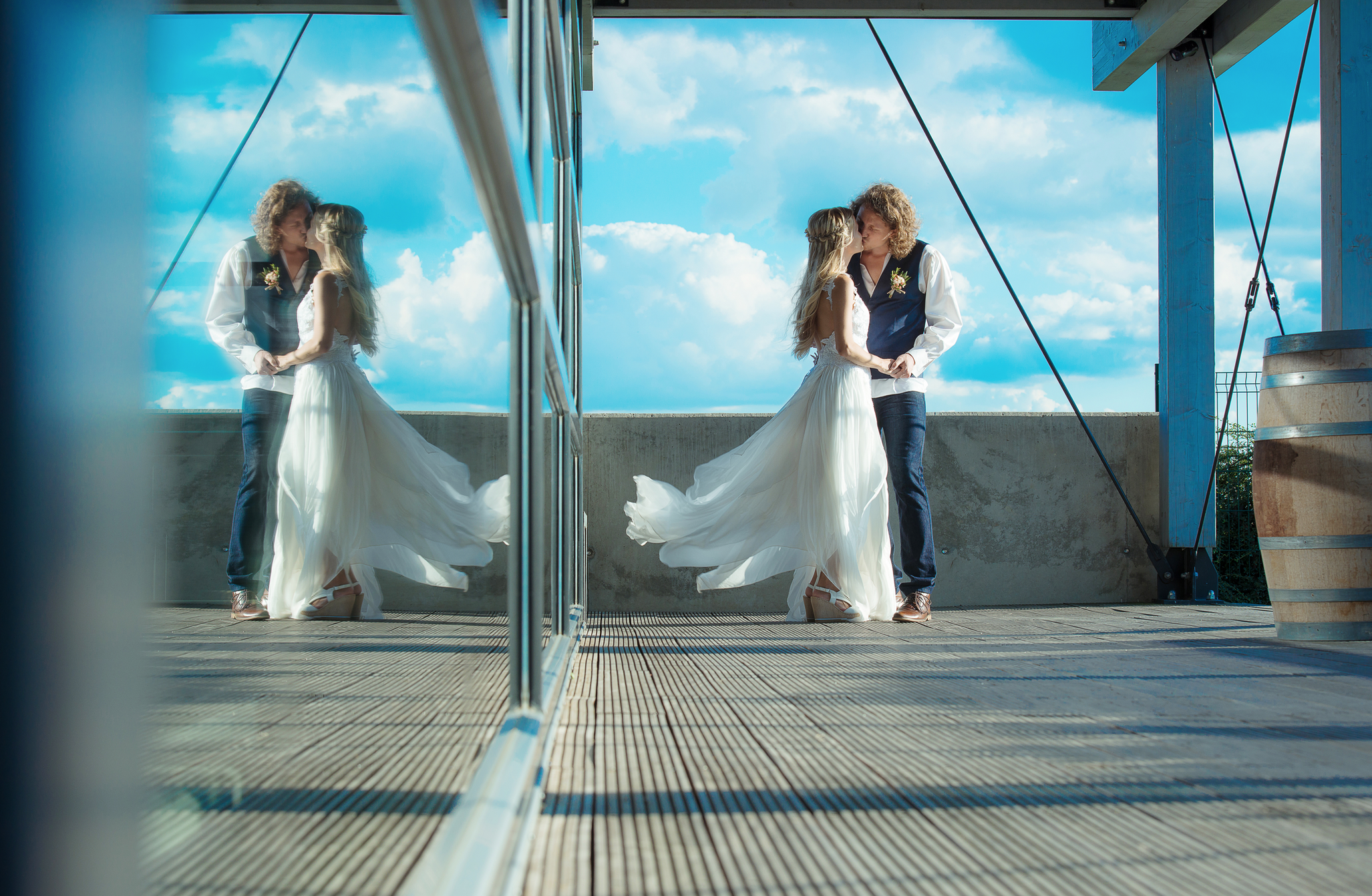 We had let ourselves get into the flow of life and begun to discover many wonderful people with their talents, who together created one big entity.

Thanks to that our wedding can be described by the words UNCONVENTIONAL, MAGICAL and simply WOW! Just fantastic :) 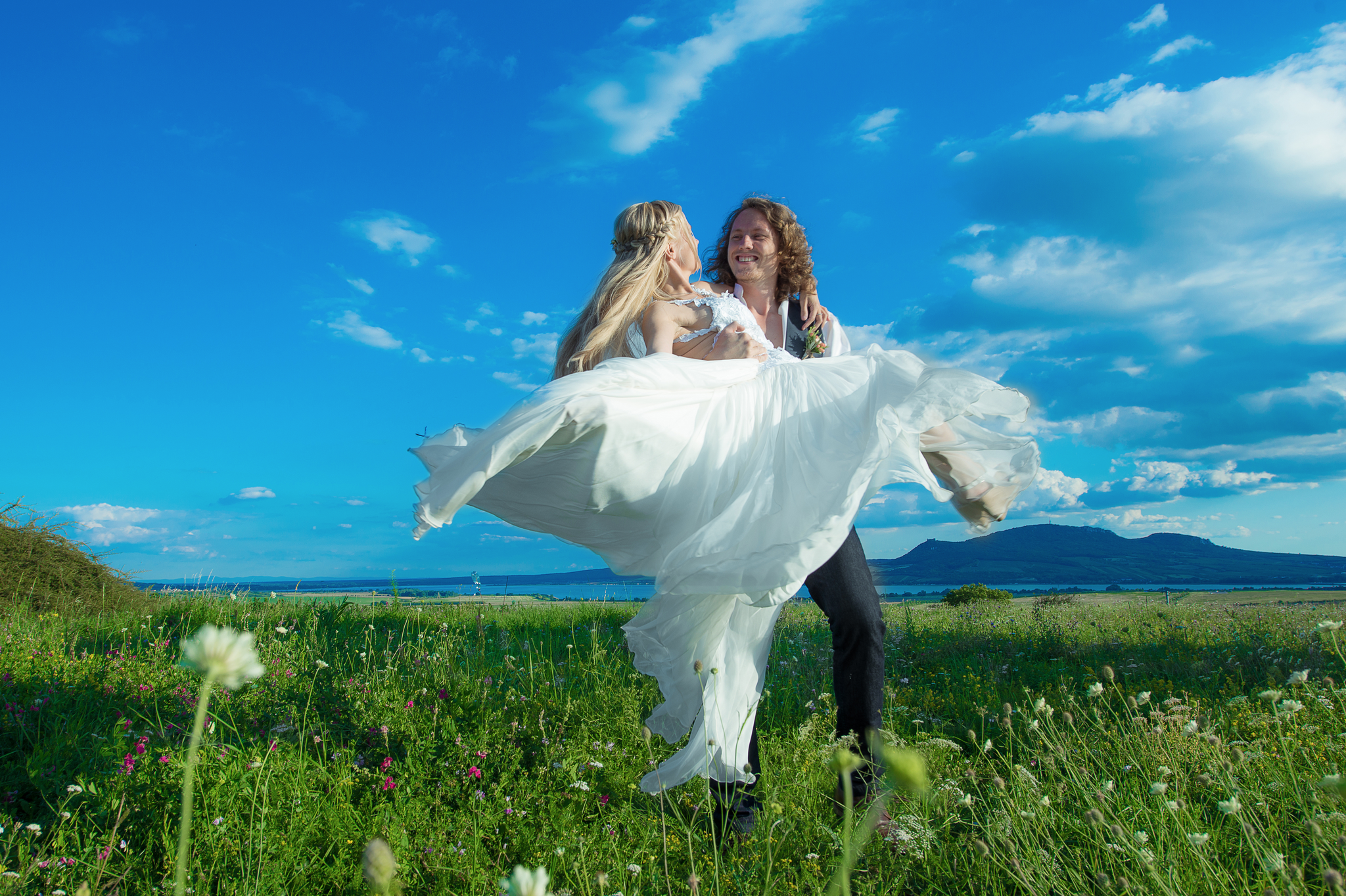 Ritual vows on the meadow under the ancient castle

The most important moment for us was the wedding ceremony itself, for which we had chosen a magical place, a meadow in South Moravia under an ancient castle.

The ceremony was led by two people – a priest and our close friend Tereza. They created a magical ritual for us with the circle of supporting guests, in which all the qualities we found essential for our relationship got connected together.

A man’s power and protection intertwined with a woman’s fullness and lovingness; magical essence, singing, wishes that shall support us on our journey. The wedding ritual was an experience that had got very deep into our souls and connected our hearts with a golden thread. 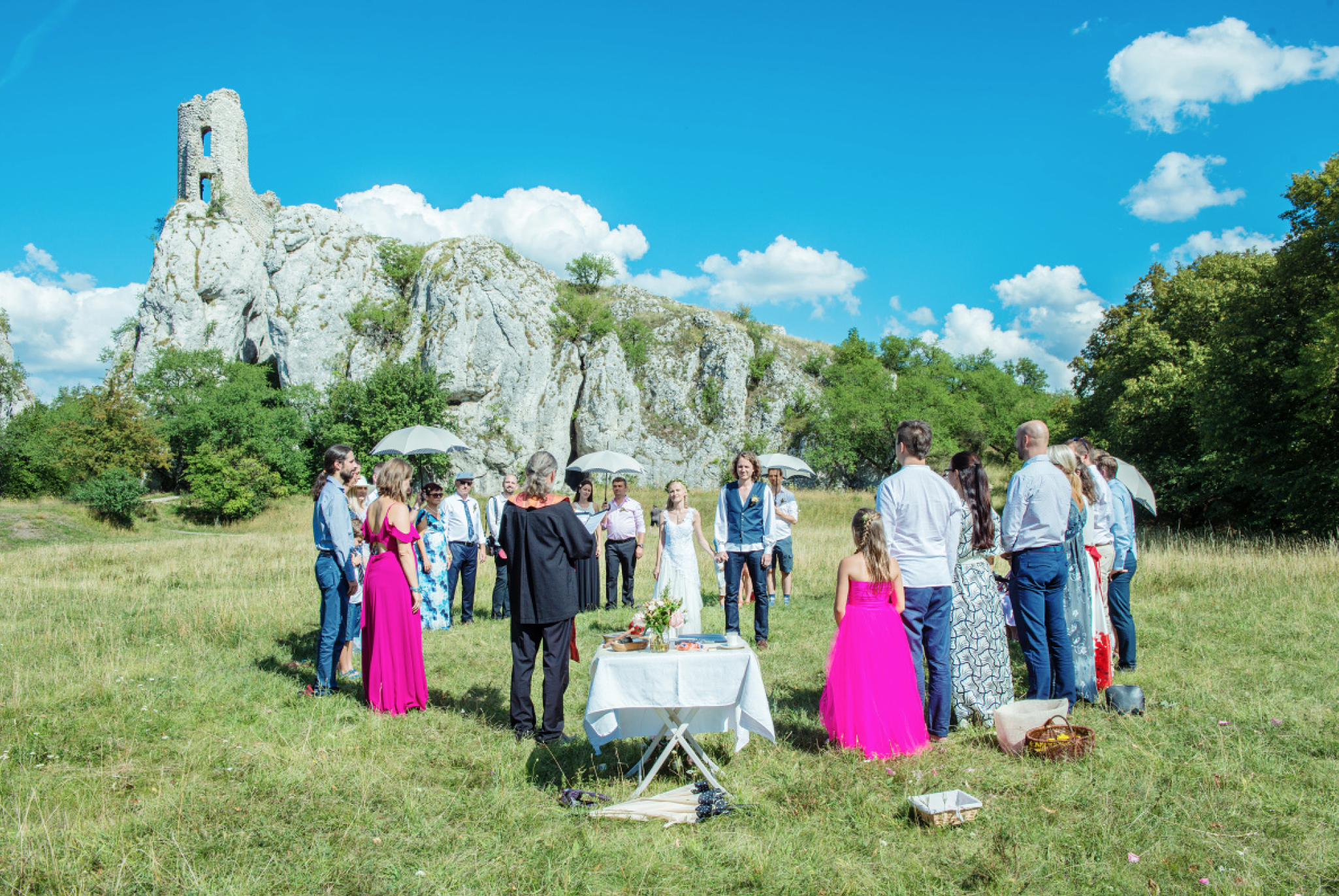 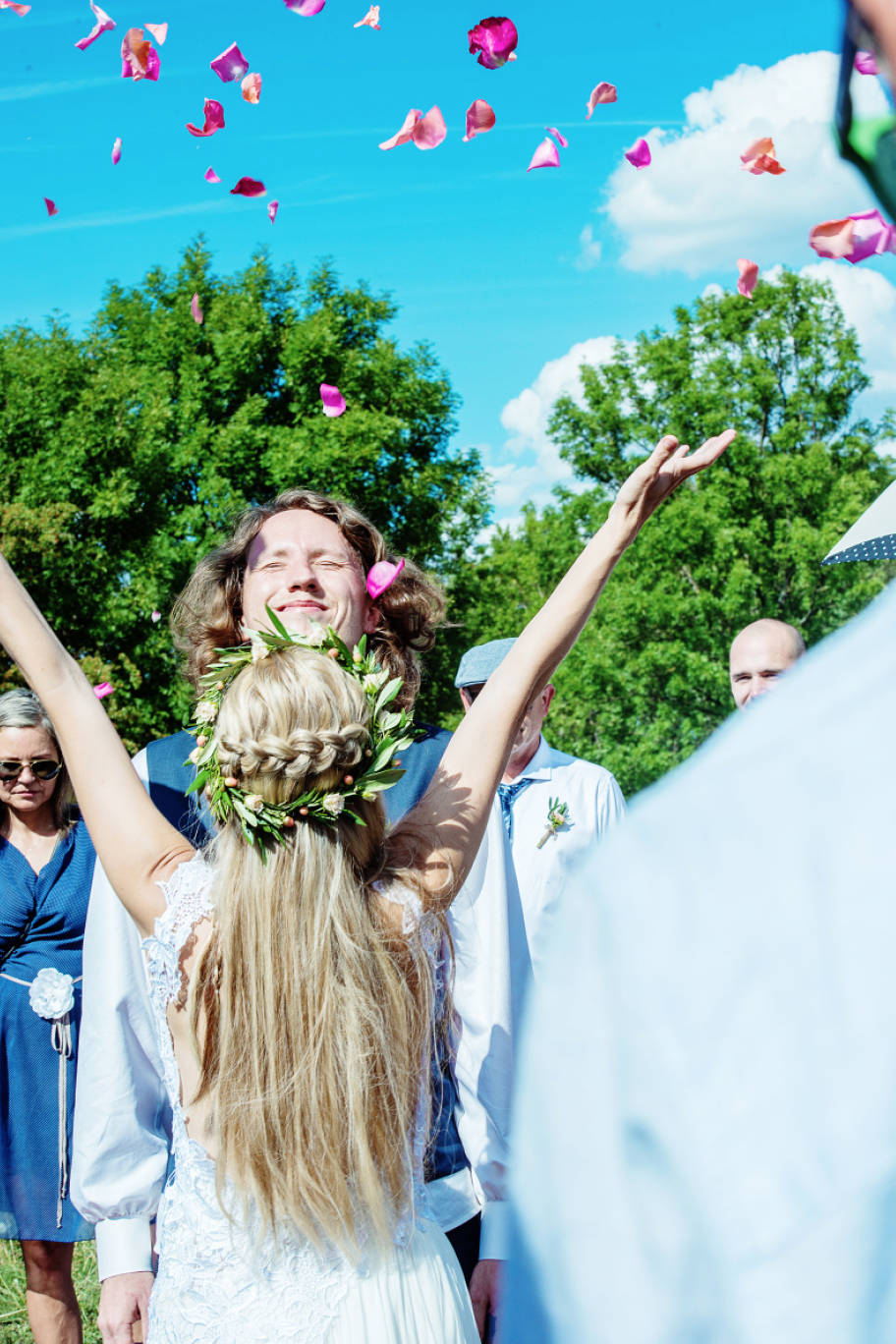 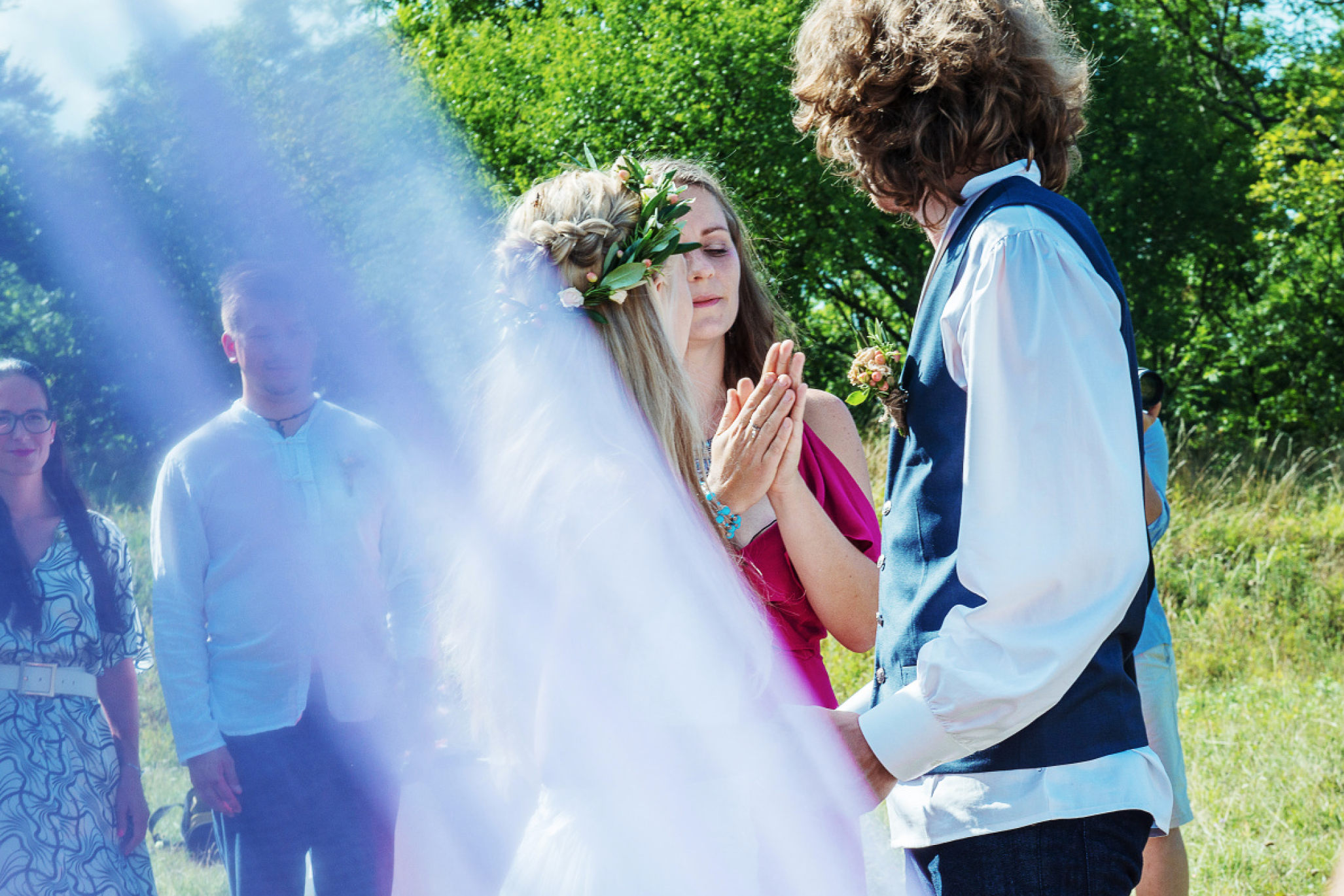 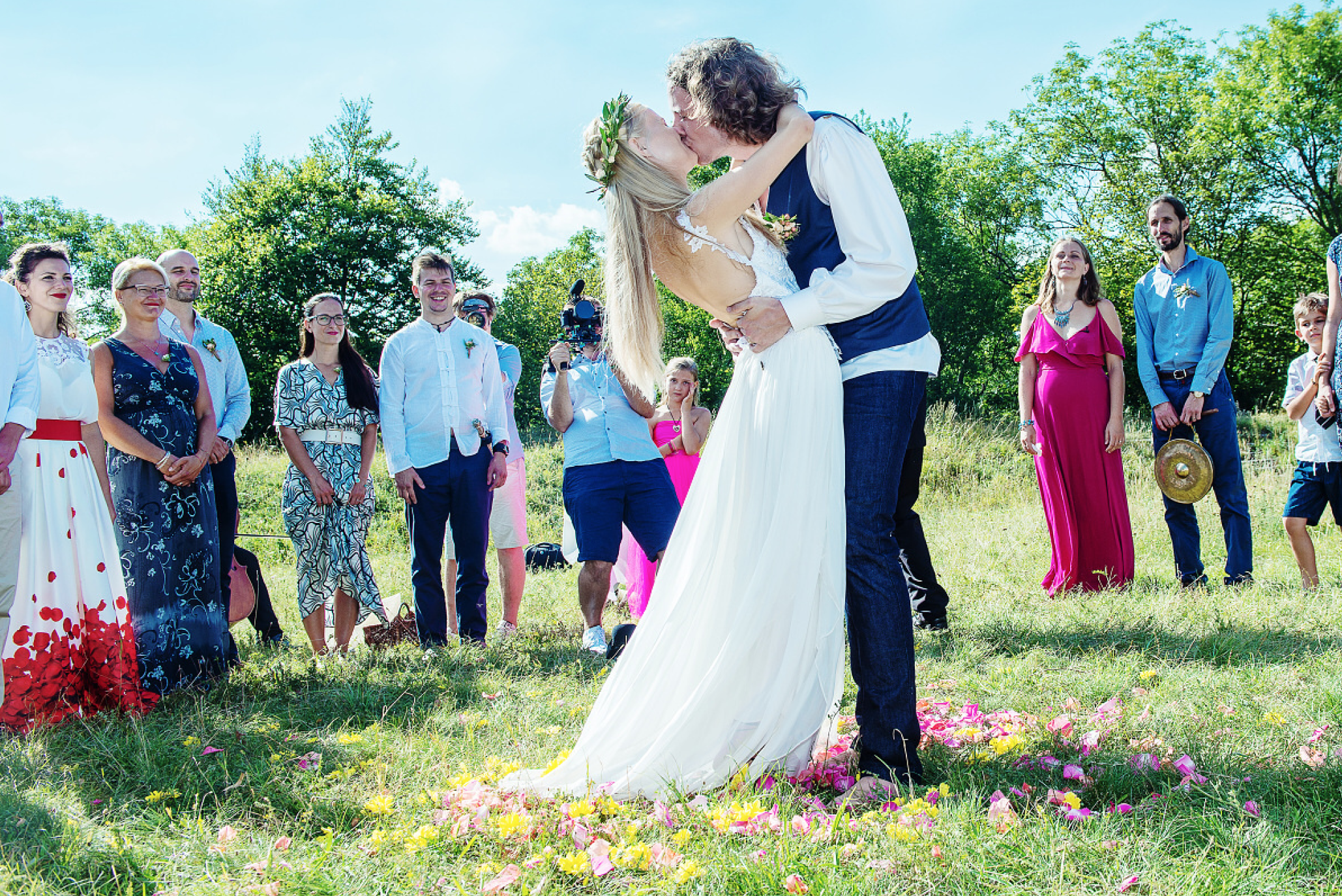 And then party, joy, and celebration until dawn…

We love delicious food that doesn’t just taste great but is an experience on the first sight. We also love the Czech South Moravian wine, coconuts, dancing and singing and then when you add an illusionist, it becomes a perfect mixture. 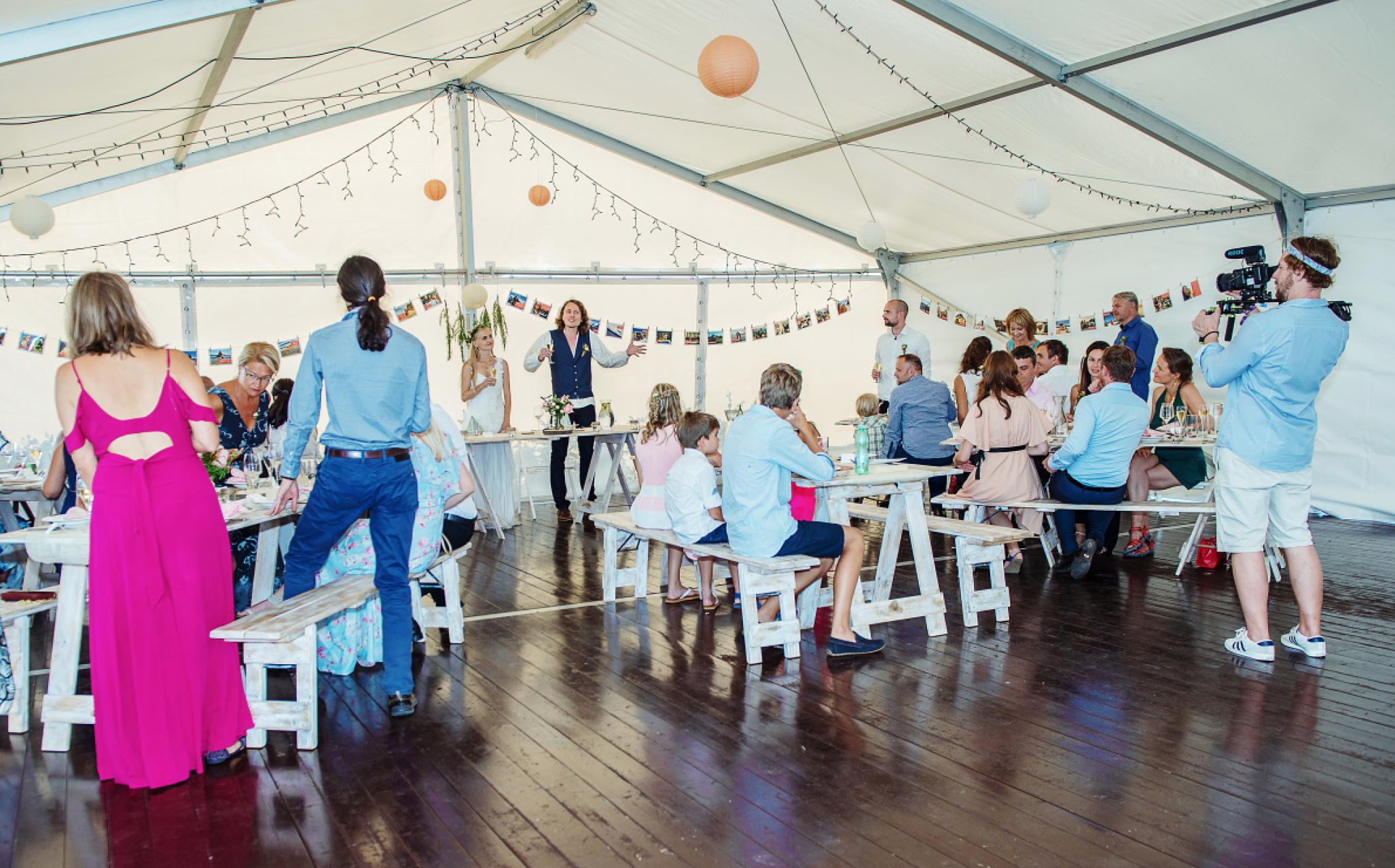 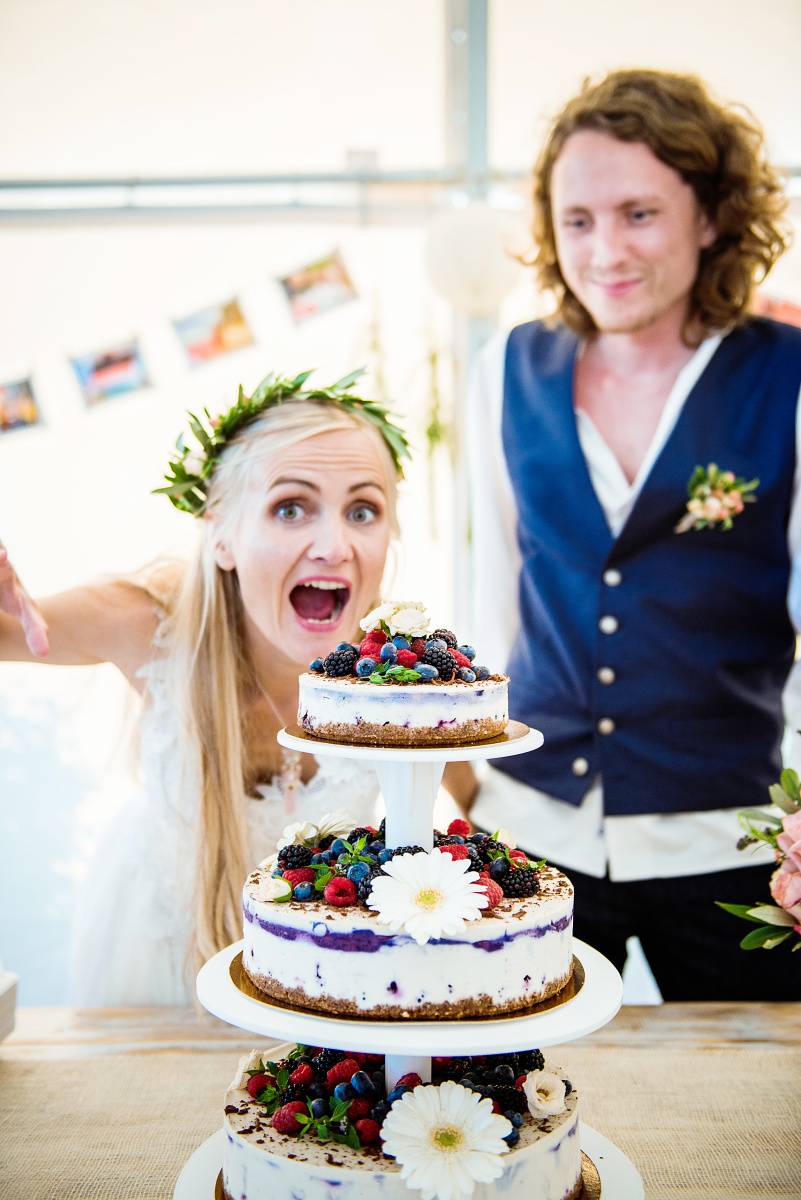 And I will reveal something about myself. Many years, when I was picturing that we would get married by chance, my highlight of the evening was – of course, the first dance.

We hadn’t left this behind and arranged with my childhood friend – who is a professional dancer, to create us a dance just for us, that we practiced on the grass or in front of our garage a few days before the wedding. :)) 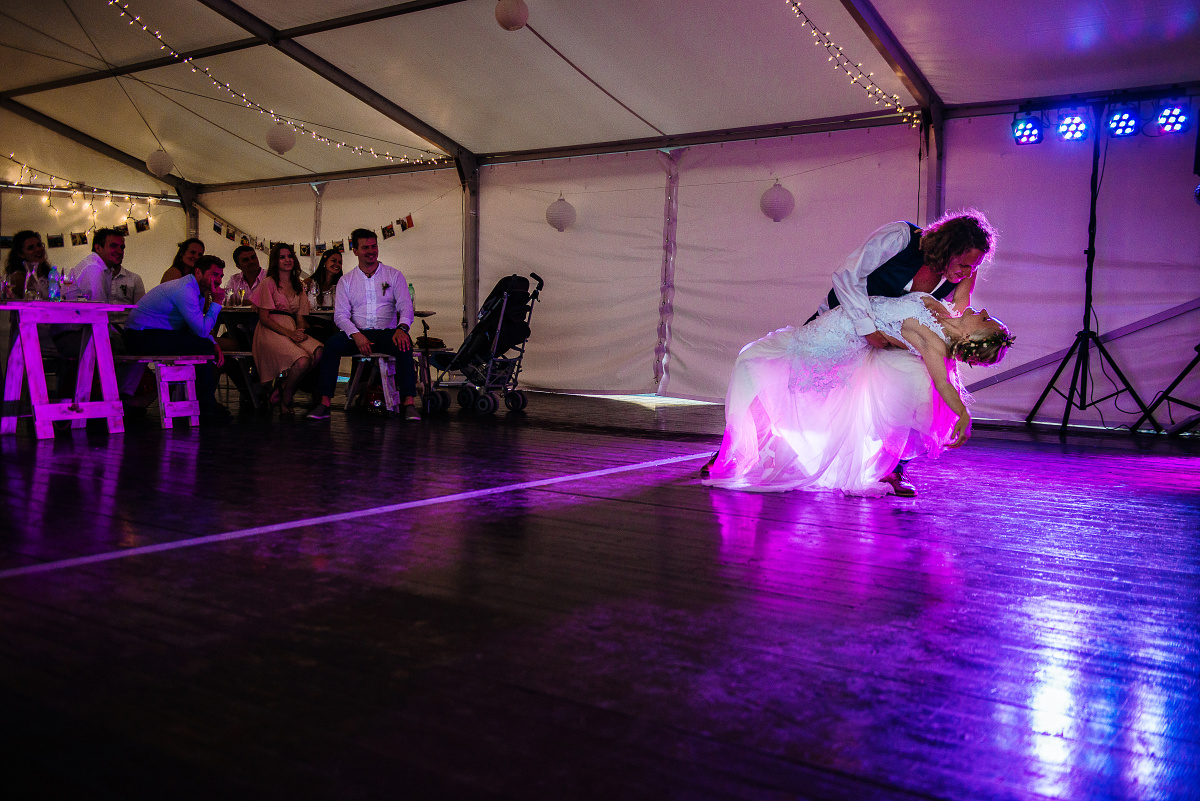 And the first dance was traditionally followed by joy, dancing and celebrating. 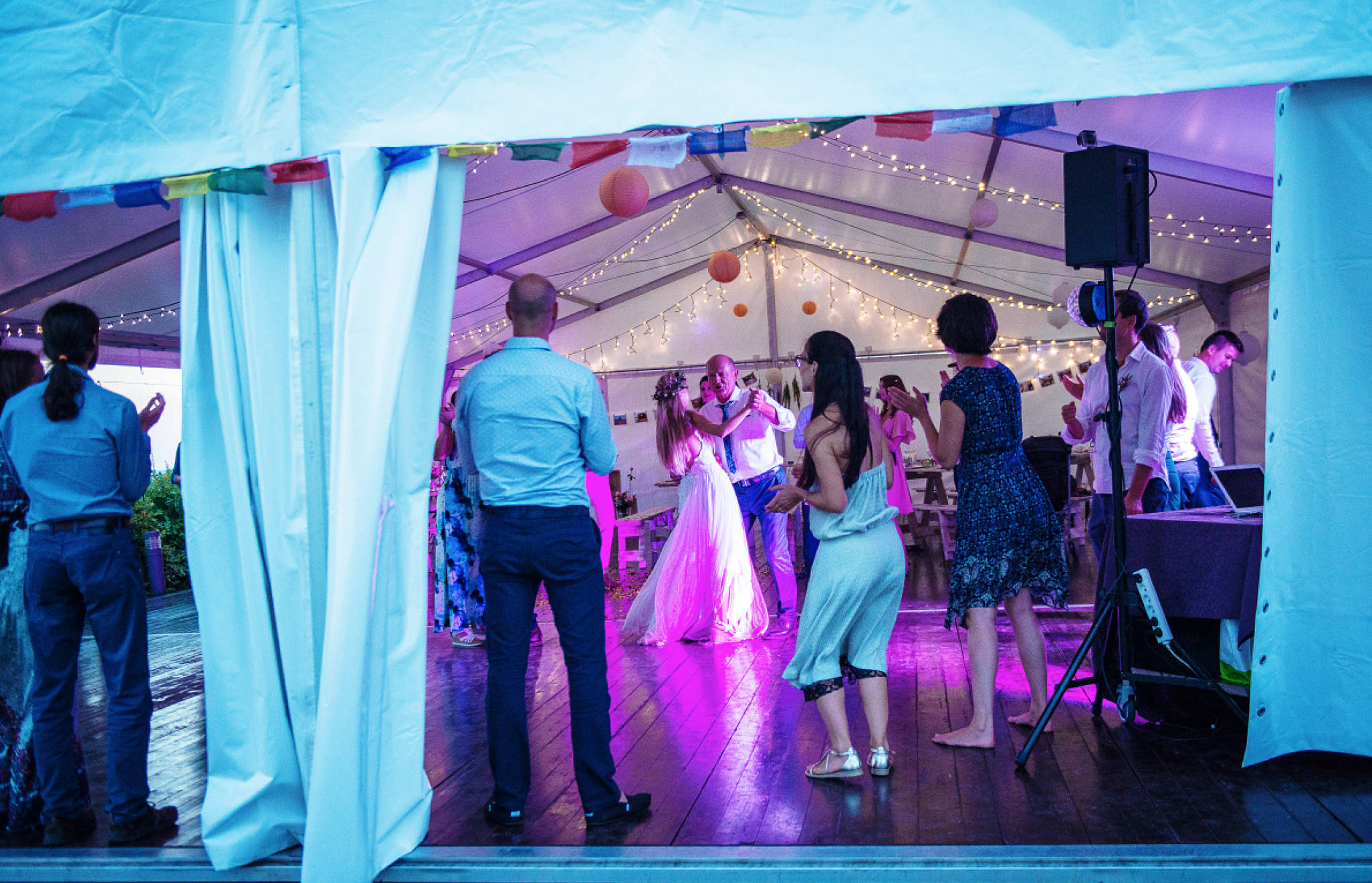 We left the celebration and fun for a moment and got to the depths and stories, and there was also an unexpected surprise for Jirka – the painting of Eagle And His Magical Witch and their story. This was painted for us by artist Jana Cardova, and displayed the essence of our relationship. 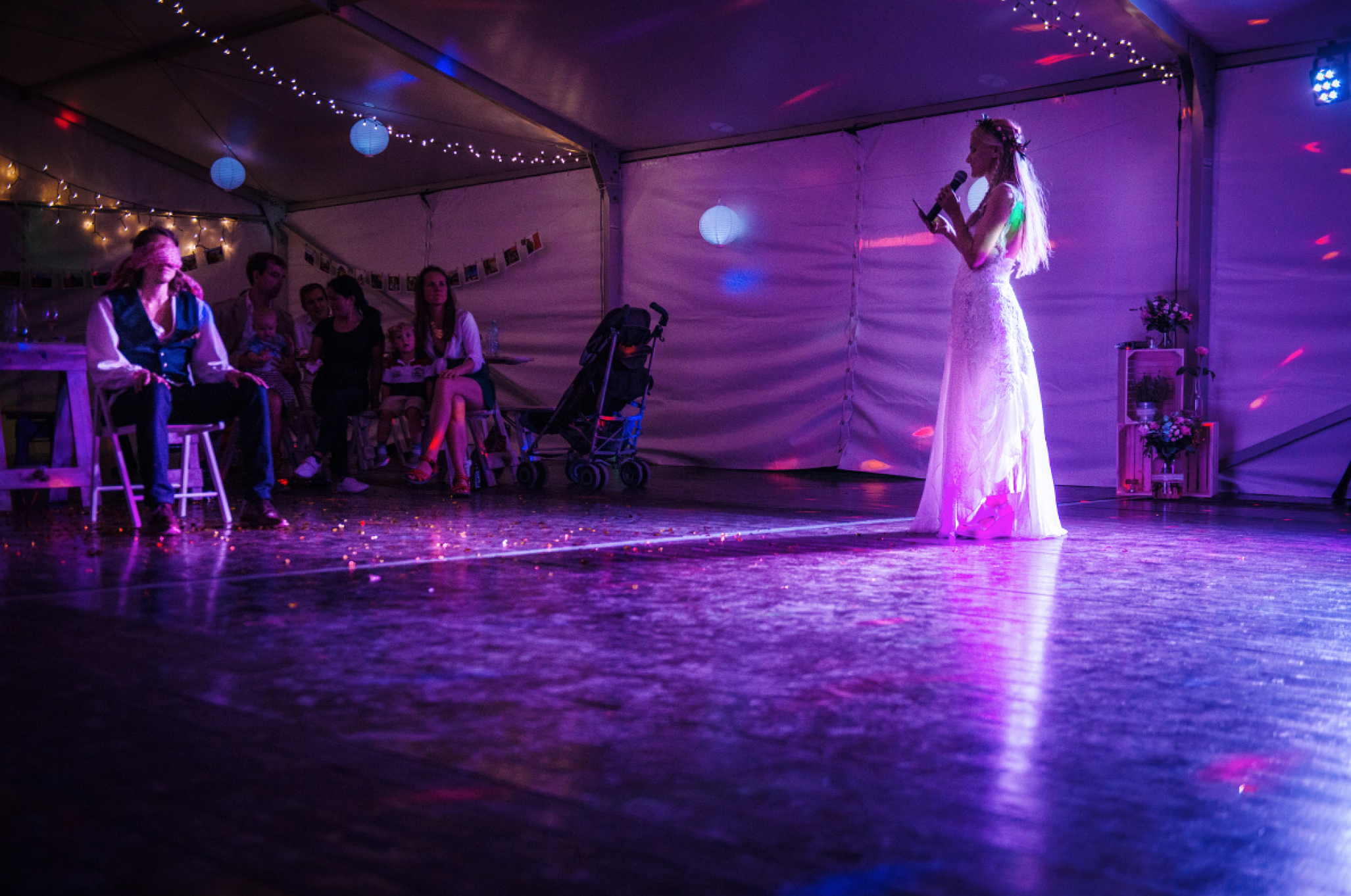 It wouldn’t have been us if we didn’t add a bit of Asia… Filipino massagists were a great pause for many guests during the celebrations and bouncy castles pleased the children’s souls and a singing quintet the souls of others. 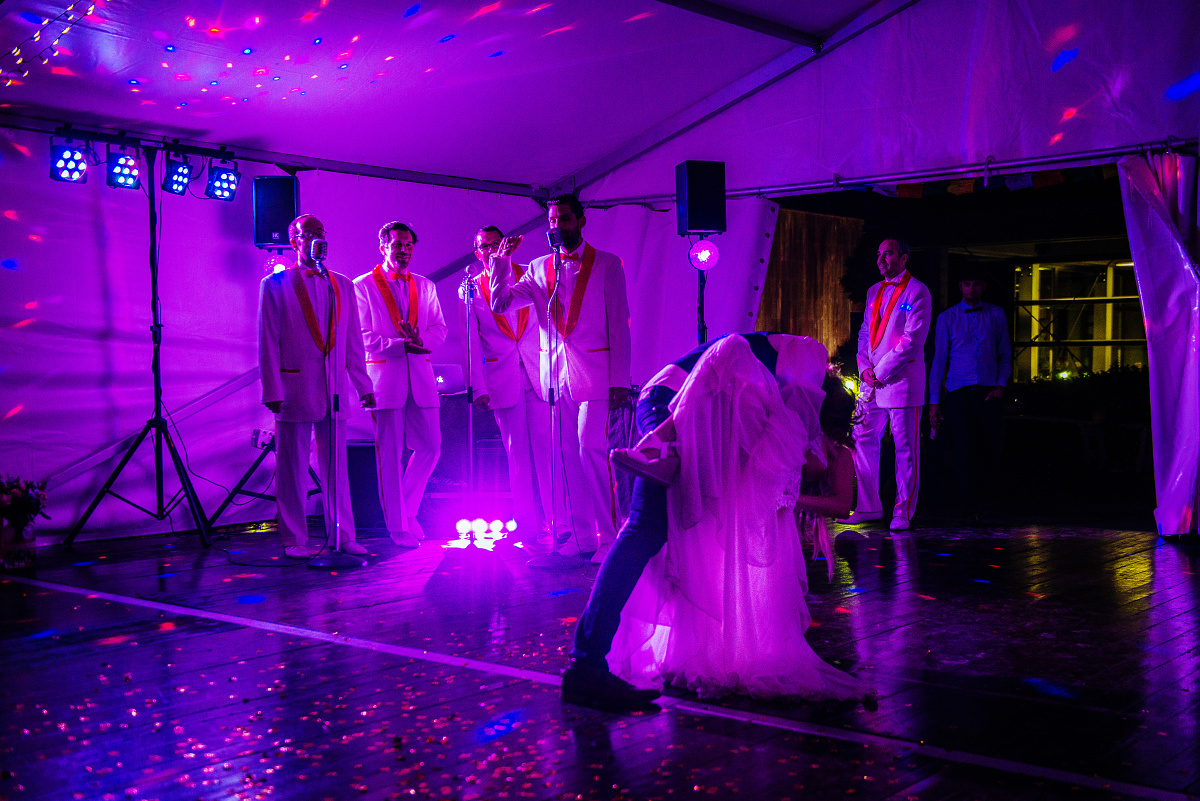 And then only joy, passion, happiness, talking, dancing, celebrating, and laughter until the dawn and a wonderful production by Dj Shafff. 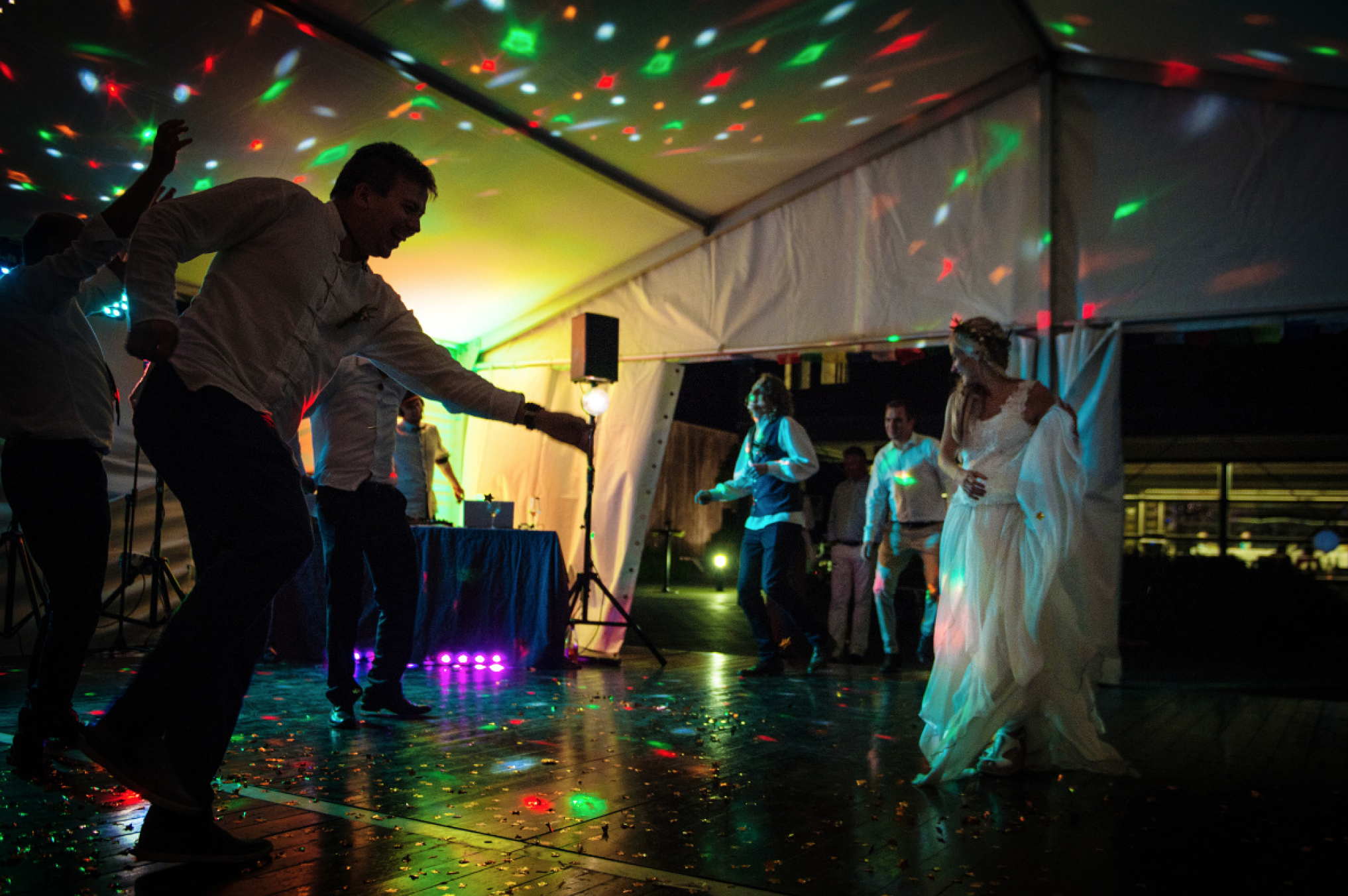 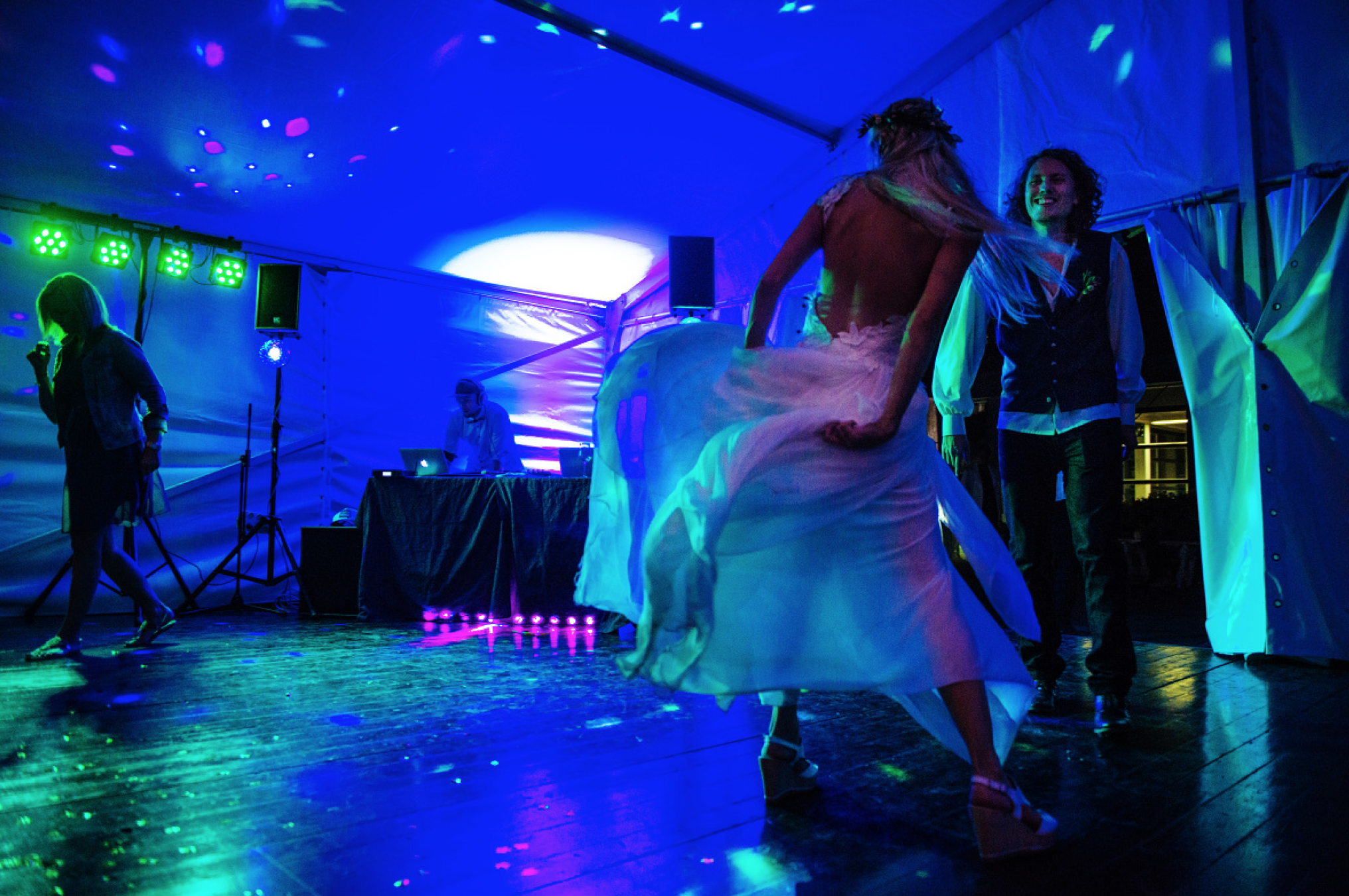 We would like to thank our loved ones and friends for such an amazing atmosphere, that was created during the day we shall never forget. 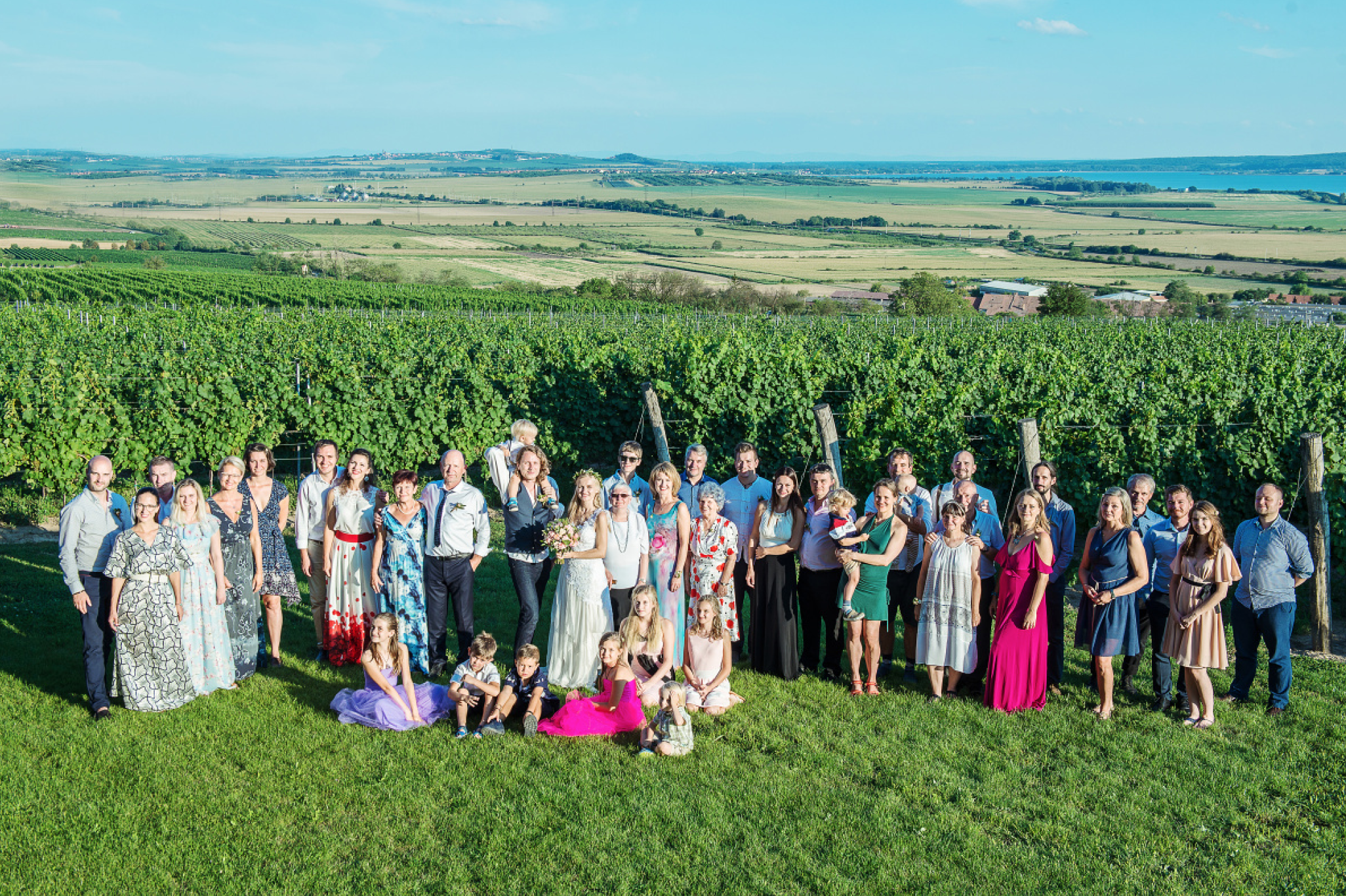 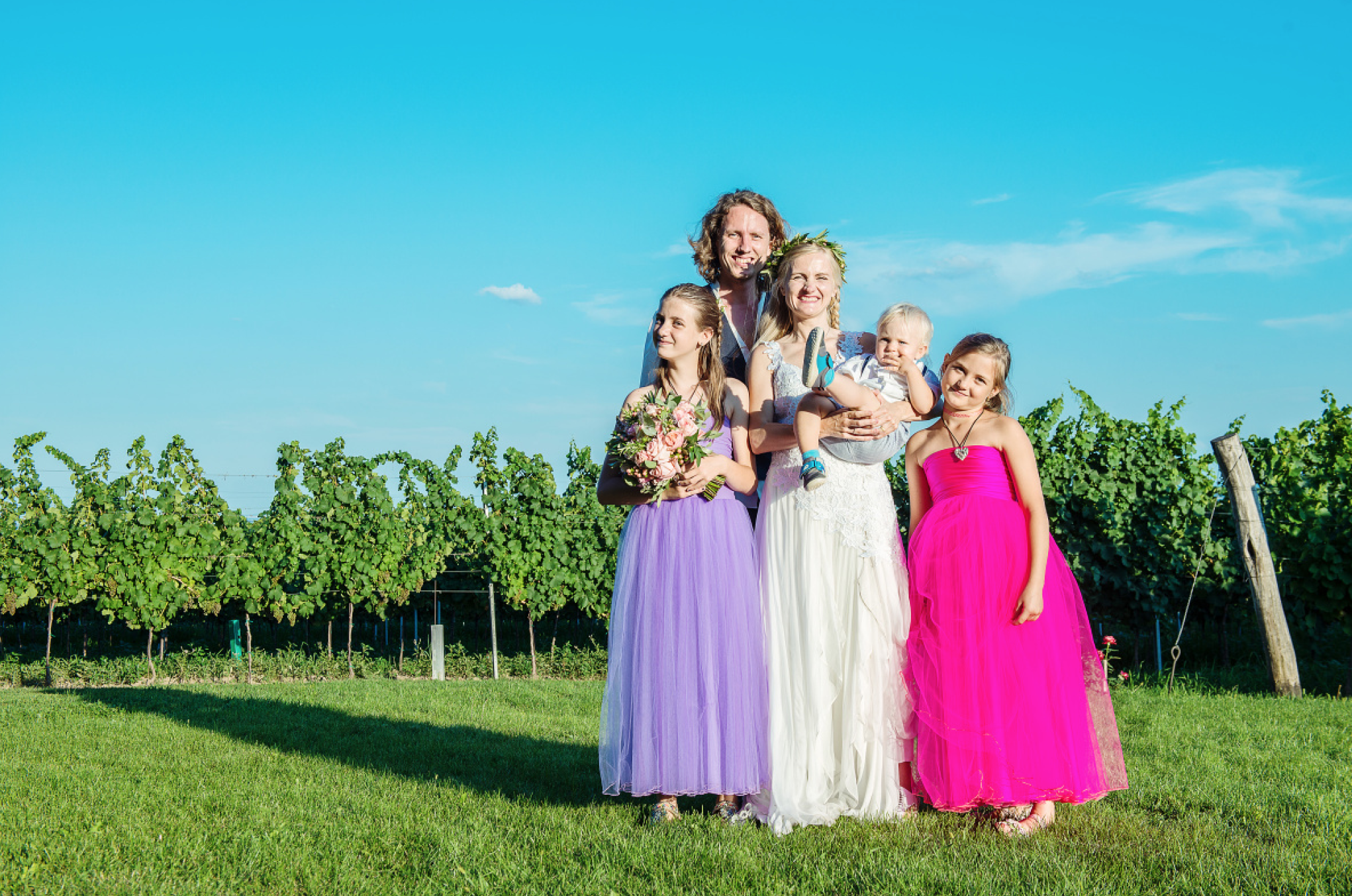 Gratitude, happiness and freedom rise of the truthfulness

To do things truthfully means to feel, WHO I am. To feel, WHAT I really want and say YES. To distinguish what, on the other hand, other people want from me and be able to say it NO, if I don’t feel it.

To be authentic means to always act according to our inner truth – whether it’s pleasant or not. To show our inside, even we get worried at some moments, that somebody will think of us as strange. We need to be able to deal with ourselves.

It’s fantastic to be strange and we can allow ourselves to be. It’s ok to feel that you live TO THE FULLEST and you are YOU.

This is the true FREEDOM.

And if this story shall have a message, I will be grateful if it is the message of freedom for you. The freedom that comes when you allow yourself to be truly YOU.

It means to search; who you are, what you feel, what you want and what you don’t want. It means to discover what it means for your every-day life. It’s maybe a lifetime job but it’s an adventurous and joyful job. 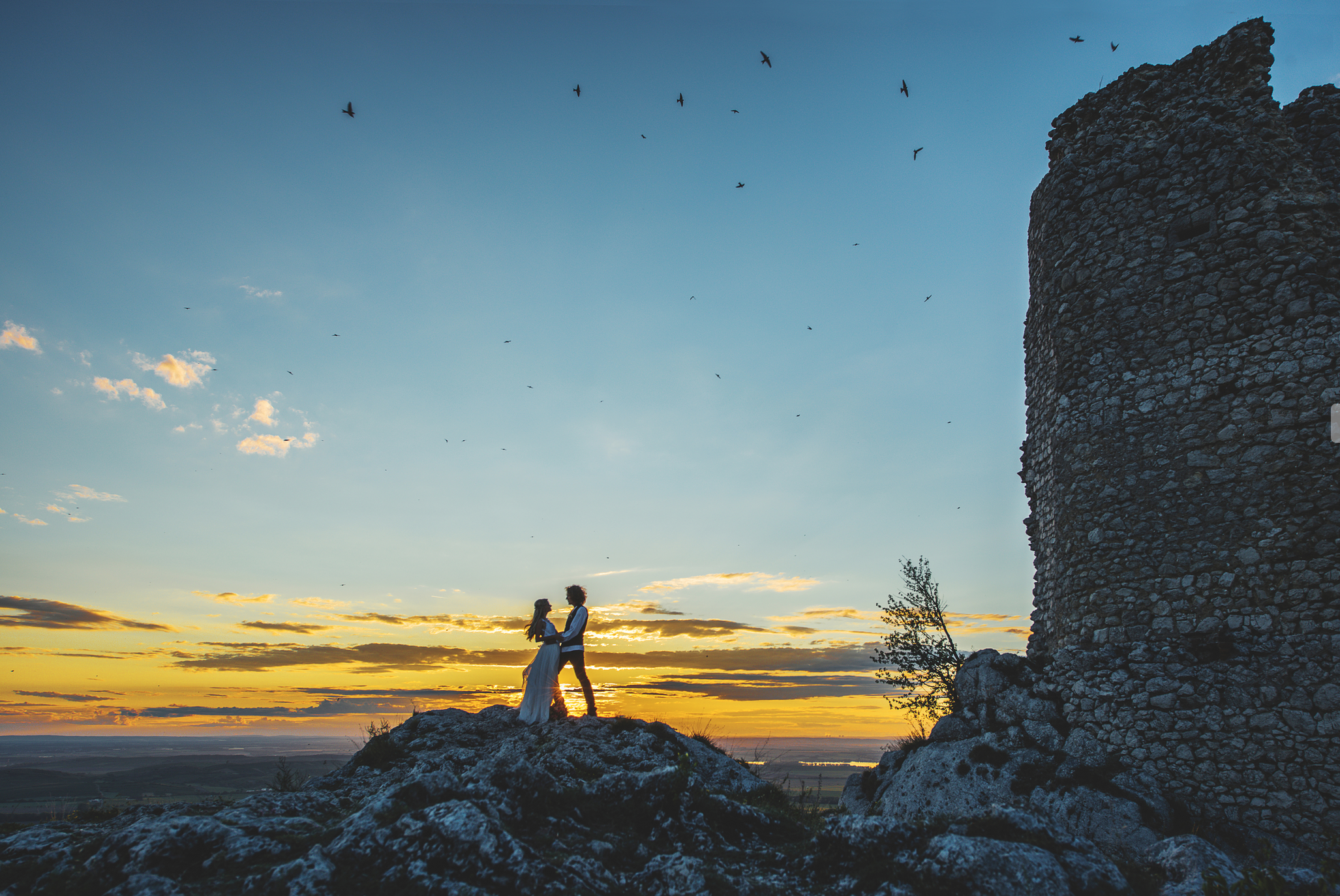 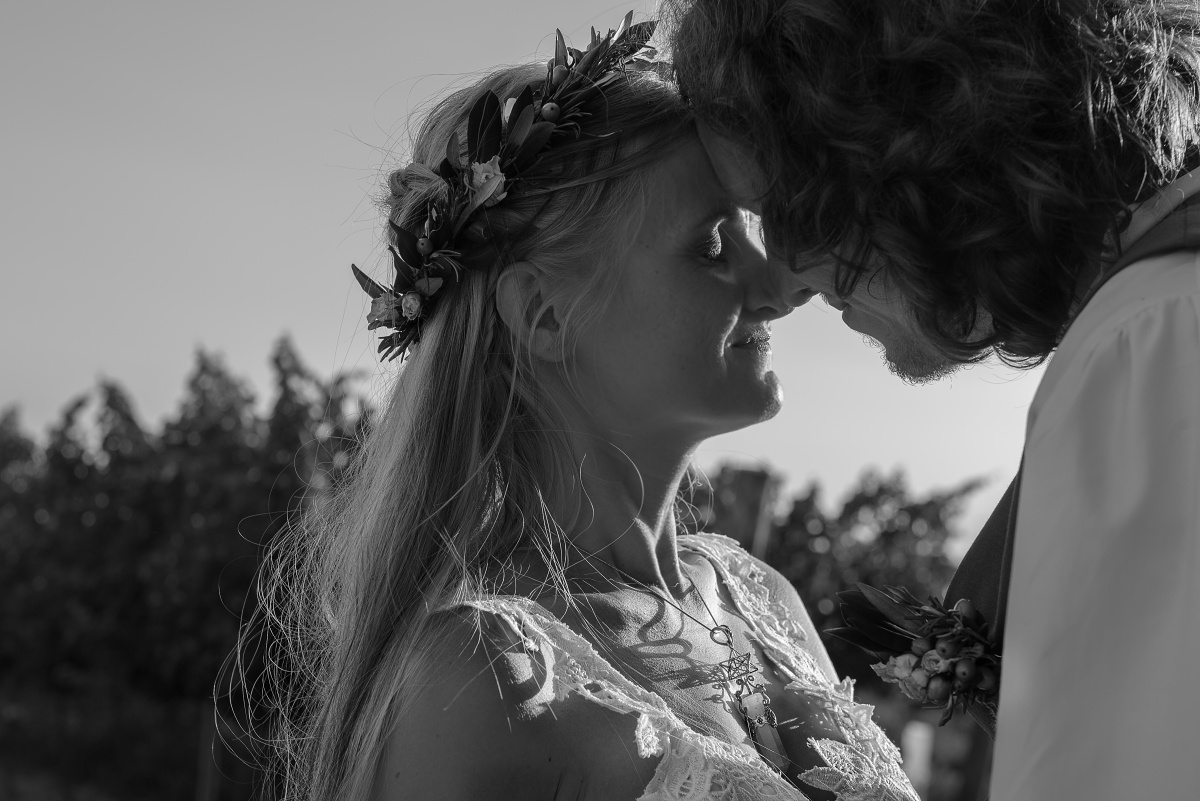 Do you have my
book BEACH BUSINESS?

(yes, i am shipping worldwide) Do you wish to live a life you don't need a vacation from?

A life, where you have the freedom to live freely, happily and to the fullest?

This is what the Beach Business book is all about...
Welcome to my World.....

stanislava.mrazkova@gmail.com
lives her life to the fullest and makes her dreams come true, even the craziest ones, every day. A few years ago, she decided she didn't want the days to pass by in vain like sand in an hourglass. She is a woman, a mother of two daughters and one son, a partner of a great man, online marketing expert and a successful entrepreneur. Stania is an author of a Beach Business book, Beach Business online course and an eBook From a Stressed Out Mother to a Beach Entrepreneur. She inspires people how to live freely, happily and to the fullest. Teaches them how to use the potential of the internet and online marketing, so that they can start a journey of their dreams and run their business from a beach. Read more about Stania You can e-mail Stania stania@stania.com and join Beach Business on Facebook
Web pageFacebook
Similar posts Wim Hof Method - Why Do I Take Ice Baths

"I have just experienced something amazing, I attended a workshop, where we… Behind The Scenes: Shooting Videos for the Beach Business Online Course

A beautiful holiday resort, which is washed from one side by the… Traveling the World with a Baby

It had been almost a year, when, in the middle of the…